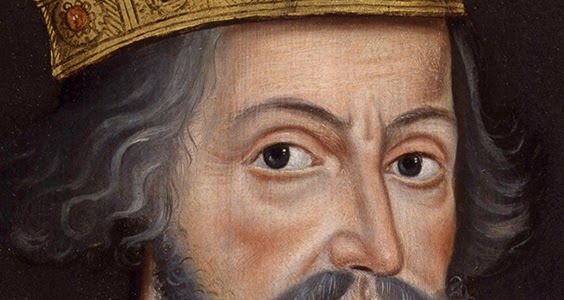 This past week, I discovered a web post called "Conquering William's DNA." I was immediately skeptical. After all, William the Conqueror (WC) left no well-defined male lineage to trace; and thousands of unrelated people (of completely unrelated SNPs) claim descent from him. When I started reading the blog post, I quickly gave up my skepticism.

The blog is run by Michael Maglio, a professional genealogist, writer, and speaker. He's got 30 years of experience in genealogy.

Michael used 37-alleles to define a Modal Haplotype. A modal haplotype may be determined for any genealogical surname group or pool of test subjects. Said simply, it's a well-defined group based on specific parameters.

After analyzing 3,800 YDNA samples, Michael arrived at a total of 27 names, in the image he created at the right.

One of the coolest techniques Michael used in his study was a scatter plot. You can see the plot on his website and the explanation that makes it so useful. He expected to find well-defined clusters rather than a large mass. The I1 haplogroup showed a large mass with no clustering. This means they all relate to one another at a time well before the Conqueror.

The R1b group of names he chose showed clear clustering.  Michael also used a "control group" just to be sure. Using genetic distance among the smaller cluster, he was able to claim that they relate about the time of WC.

In a comment exchange on the blog, Michael mentioned that the 37-marker modal shows a L21 correlation. He plans to extend this modal out to 67 markers.

The William the Conqueror Modal vs Sinclair DNA


I used Michael's WC Modal compared to an Excel spreadsheet of our full list of Sinclair DNA participants to see which showed up.

Even opening up all of the above alleles to other possibilities, I still end up showing our L21 Lineages matching Michael's William the Conqueror Modal DNA.

My earlier attempts at this used a less scientific method to try to understand the families of WC. They included studying those families who were granted the best / largest land holdings in post-Conquest England. That research led to a list that included:
Beaumont, Gifford, and Warenne (Warren), among others.

I also studied the names on the Auchinleck Manuscript. Unlike the Battle Abbey Roll, it's a slightly more reliable document of those who came with WC.

Back in March 2009, I posted this web page attempting to identify the DNA of the Conqueror by understanding the families with good claims to a direct paternal connection. This required a lot of research. My best candidates were:
Devereaux
Hereford
Norton
Pearsall
Clifford
Ramsey

According to Dudo of Saint-Quentin, Gunnora was of noble Danish origin. This fits nicely with the family of Warenne (Warren). I wrote a great deal about the Warenne family on our website at this link.