If your Sinclair DNA is showing the L21 SNP, then don't' be surprised if you see the name Kerr in your name matches. One of our Sinclair DNA L21 member shows a match with a Kerr on 33 out of 37 markers tested. Another member matches a Kerr/Carr participant on 103 of 111 markers. That is an extremely close match.

According to the author Bruce A. McAndrew, a cadet line of the St Clair family of Herdmanston held the barony of Cessford from 1376 to 1416.

The lands of Cessford are in the border region, about 13 miles north of Jedburgh Abbey. Later, in 1450, powerful Cessford Castle was built here by Andrew Ker.

Did the Sinclairs leave their DNA here in Cessford?
Did a Kerr take the name Sinclair from the local St Clair land baron?
We don't have enough evidence to make a decision at this point.

Through more SNP testing and lots of records research, we hope to get the answers.
Posted by Hookedx12@gmail.com at 9:03 PM 2 comments:

The "Holy Grail" of DNA? 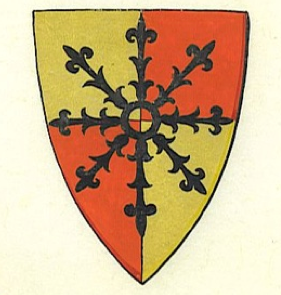 A study of People of Medieval Scotland and several other medieval records bring up a cast of characters you might wish were in your SNP name matches. In this case, there is one SNP group that has a very interesting set of names matching them.

(I should point out, no Sinclair family members currently in the DNA study share an ancestor with this group for over 2,000 years)

There's another group dedicated to Z18+ L257+ people. This group uses the four alleles of DYS464x to divide the group even further, and this separates these names. Some of the TMRCA's they're arriving at are as recent as 327 years ago. For my area of interest, that's too recent. (Never thought I'd say that about DNA :)

If I'm reading correctly, the TMRCA for L257+ is 2,298 years ago. (source)
They also have:
Fraser
Cockburn
Dunbar
Mandeville
Riddell
Preston
Roche

This is like a Who's Who of families in medieval England and Scotland.

The reason I got so interested is, after looking up the Ridel surname in Keats-Rohan's Prosopography, I found that Ridel and Basset were different surnames among brothers. They were directly of the same father. Specifically, (Keats, p. 1107) Gaufrid Ridel was the son of Richard Basset of Great Weldon, Northamptonshire.

The Basset family became very important in Scotland. They're interesting because they witnessed a land exchange of Roslin and Catcune. "Alexander, king of Scots, gives notice that, since Henry of Roslin, tenant of his lands of Roslin (MLO) and Catcune (nr Borthwick, MLO), has resigned and quitclaimed these lands to him by rod and staff, he has given to William Sinclair, knight, said lands of Roslin and Catcune, doing service of half a knight." (Source)

The Fraser family also witnessed that grant from Alexander III.

The Mandeville family got me very interested because Hamo St. Clair (who received the creation of the baronies of Eaton Socon and Walkern) was closely alligned with de Mandeville. (Vincent, p. 243)

The contributions of the Dunbar and Cockburn families to early Scottish history under Alexander III are well known.

The Roche family is interesting to me based on their history in England.

In a previous blog post, I mentioned G.W.S. Barrow and a paper "Companions of the Atheling." Barrow credits Malcolm Ceannmor as welcoming a group who opposed William the Conqueror. His list:
Lindsay
Vaux
Ramsay
Lovel
Touris
Prestoun
Sandelandis
Bisset
Sulis
Wardlaw
Maxol (Maxwell)
and many others unspecified.

I think we should keep an eye on this L257+ SNP.  With more Saint Clair participation in England, we could someday see a match with this group. 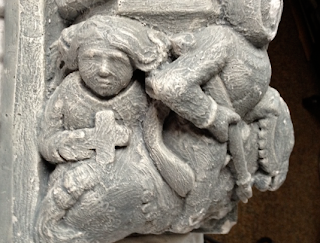 Today, I received an email from a young researcher in our family. She had found us via the Sinclair DNA website. Her note included some well-thought-out questions and points. I realized the answer I sent her may be of value for others, so I'm answering her here.

On Sat, Feb 2, 2013 at 12:29 AM,
....I was reading The Da Vinci Code and it mentions the St Clair's going back close to Anglo-Saxon period so I decided to do some research and I found your website. However, when I look up facts about us the only one I can seem to find consistent is that our origin is French which then changed to Scottish during the time of William the conquer. Also that it dates back to about 1060 ad and we we're in Normandy at some point. A few things in The Da Vinci Code mentions Templars and freemasons and I was wondering if you have some more information about our history considering you had historians helping your investigation. I would be really interested into learning some of the things you know.…

Thanks for your note. That's very funny that your dad's name is the same as mine. I've found a few others out there as well.

First, the "mythical" history of the St. Clair family from the books Dan Brown likely used to research us. By the way, I used the spelling St. Clair when talking about the wider family because that was the spelling found in the oldest known surviving documents. That or "Saint Clair."

The books I mention above are fun to read. You can find them and many others at the Sources page on our Sinclair DNA website.

A group is currently putting together what I’m sure will become the definitive books on the real history of the Saint Clairs in Normandy, England, and Scotland. If you watch our websites, you’ll learn more when it comes out.
The history of the Saint Clairs is much more complex than those who wrote the books about us could have possibly have known. Because we have the family DNA study, we've got some unique data which those who wrote the old books about us didn't have. Here's what we've learned since 2004, when we began the DNA study -

There are 12 distinct branches of our family (so far), and likely will be more when we get additional participation from England and France (which we hope to do over the next 2 years).

Now, in light of DNA research, a more factual version of our Sinclair / St. Clair history -

Thanks for the note. I hope this wasn’t too much reading.

Please keep up with the DNA study at our blogs, website and social media.