[post updated and corrected 11/4/12 based on information from David Vance. Thanks David]

If you're following this blog, you'll notice that I'm obsessed in tracking down particular medieval families who changed their second names. I don't even call them "surnames" because of their fluid use of land-based names.

Richard Ferguson (p. 286) has Robert, Baron of Dalston as the brother of Hubert de Vallibus (the Latinized spelling of Vaux).

The Dalston Barony was granted by Ranulph de Meschines to Robert, brother of Hubert de Vallibus, Baron of Gilsland.

That Hubert was the Baron of Gilsland, grandson of the founder of Pentney Priory.

Hubert and John de Vaux had come north at the invitation of David I.


Many older books state that they were brothers, but there's no primary evidence of this.

Hubert received Gilsland from Henry II.  John received Dirlton in East Lothian, Scotland, on which he later built Dirlton Castle, about 13 miles north of the Morville family seat of Saltoun Castle.  The Morvilles were giving gifts to Lanercost Priory, witnessed by the Maitland family, among others. 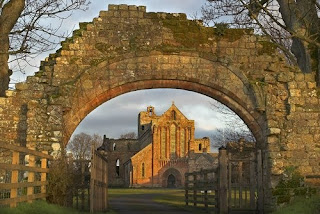 My current obsession with Dalston started after seeing the spelling Dalton in the STR matches of a particular lineage in our Sinclair DNA study, and them bumping into the connection in the records pointing to a blood relationship with the de Vaux family and the Morvilles.

Guidebook to Dirleton Castle, which I picked up at the castle in October, 2012. Published by Historic Scotland.