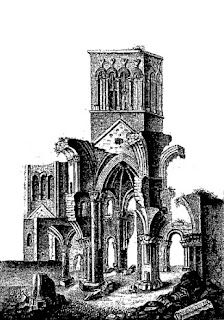 Shown above is a 19th century print of the ruins of Montebourg Abbey in the diocese of Coutances, Normandy.

Richard de Redvers was buried at Montebourg in 1107. Lewis C. Loyd had the Moreville family holding land of Reviers (Redvers) in England after the conquest.  Many researchers believe the Saint Clairs of England came north to Scotland with Hugh de Moreville. He later granted them lands which became their Hermanstoune holdings.

Robert de Vaux and Roger de Stuteville were Sheriffs of Cumberland and Northumberland, 1170 - 1185. Their families were, at one time, both prominent. They worked together in silver mining and minting.

William d'Aubigny (Albini), the Earl of Arundel, granted lands to Montegourg Abbey. He also gave to Thetford Priory, as did the de Vaux, Warenne, Haga (Haig), Malet, Bigot, and Longespee (Earl of Salisbury).

In 1175, Gilbert de Hunfrancvilla (Umfranville) gave his chapel of Douna to Montebourg Abbey for the well-being of his soul and those of his family living and dead. Among the witnesses was Philippo le Ver (Vaux).

Anonymous, “Calendar of Documents Preserved in France: Illustrative of the History of Great Britain and Ireland. A.D. 918-1206, Volume 1,” Edited by J. Horrace Round, M.A., Printed for Her Majesty’s Stationery Office by Kyrk and Spottiswoode, printers to the Queen’s Most Excellent Majesty. 1899


Lyttelton, George, "The History Of The Life of King Henry the Second, And of the Age in which He Lived…" printed by Sandby and Dodsley, 1767