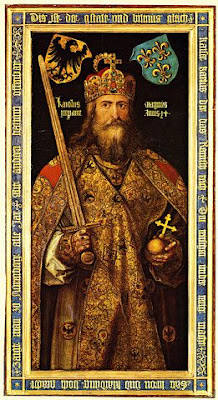 The Sinclair DNA study has 12 distinct lineages. Some of these lineages have many different surnames in their DNA matches. Others will find that they have almost none outside of our family.

Early on in the recent history of DNA, we were told the reason for all of these name matches was:
1. The fact that we are part of the R1b haplogroup
2. The R1b haplogroup were successful breeders since the last Ice Age.

But this theory became suspect when some of our R1B members had almost zero name matches, and others had nearly 1000. The question of why some people have so many name matches has never really been resolved by Family Tree DNA, or other groups on the Internet. And then there's the question of the surnames among the name matches.

Today I'm going to propose a new theory, based on research underway in the Sinclair DNA study.

Some of our Sinclair DNA name matches show nearly 1000 different surnames. Setting aside the standard reasons that this might be the case, what other reasons might account for having so many name matches?  I offer the theory that perhaps we have an ancient ancestor who was very active, siring many children. The candidate that comes to mind is Charlemagne.

History.com suggests that Charlemagne had up to 18 children. Those would be the documented and prove-able ones.

Other researchers have suggested he had 4 or 5 wives and 5 concubines. Click here >

Beryl Platts, a researcher whom I quote often in the Sinclair DNA study, has suggested that many of the Flemish of Scotland are direct mail descendants of Charlemagne. If you  study the counts of Boulogne, you will see that they have descendants who have surnames like Graham, Lindsey, Oliphant, Seaton, Stewart, Montgomerie, Hay, Umfraville, Douglas, Crawfurd, etc. These are the surnames Platts focused on in her research of the heraldry of Flanders. These are also surnames that show up in many of the Sinclair DNA study's L21 SNP participants' name matches.

Charlemange (Charles the Great) was born about 742 AD and died in January 814. He was the son of Pepin "the Short" and the grandson of Charles Martel, famous for winning the Battle of Poitiers against the Umayyad Caliphate.

No one can yet prove the DNA of such people.

The Flemish Influence in Scotland, by Annette Hardie-Stoffelen